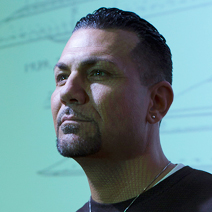 PRESENTATION: Crop Formations and the Orbs of Light
Michael FreeHawk will be discussing the mysterious relationship between crop formations and the often seen “orbs of light”. How are these two phenomena connected? Is there any truth that these “orbs of light” might possibly be a form of non-human intelligence and interaction? Join Michael for this intriguing presentation as he attempts to bring awareness to this ongoing activity and how it might play a role in human evolution and the collective consciousness…

MICHAEL FREEHAWK is from the San Francisco Bay Area and has been a researcher for over 25 years and an experiencer for much longer. Starting as a child, Michael has had numerous experiences that range from sightings of craft in the skies, spirits and ghostly apparitions and paranormal activity.

Michael has had first hand experience within crop formations and is best known for his work on what came to be known as the Chandler Formation in Chandler, Arizona. Because of the Arizona Crop Formation Michael had the pleasure of working in conjunction with well known researchers such as Linda Moulton Howe, Nancy Talbott and the late Biophysicist Dr. William Levengood.

As a result of Michael’s discovery and research of the Chandler formation, he was invited to be a guest speaker at numerous engagements which includes Phoenix and Marin/Sonoma MUFON’S, Dr. Chet Snows “Signs of Destiny” conference and various radio shows. He also went on to become a co-creator of the Phoenix Rising groups conference titled “Embracing Contact” in Scottsdale, Arizona.